Our goal is to help companies provide superhuman service to their customers and financial forecasts of x-ray precision to their investors. The solution to both is to let data clarify customer intent. Most companies have siloed data across dozens of systems, including customer service tickets, marketing spend, system usage, and survey tools. StepFunction ingests them all into cutting-edge and continually self-optimizing algorithms to predict customer actions, and suggests the most effective actions that can be taken today to optimize future outcomes. 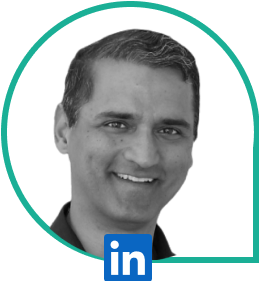 Navneet Singh | Co-founder & CEO
Navneet has spent the past decade obsessing over SaaS customer growth. Prior to founding StepFunction, Navneet was an EIR at Social Capital and an interim Head of Product at Ezetap. Before that, he was SVP Product at Vantiv (America's second-largest payments processor, now merged with Worldpay). Navneet has also helped build and grow startups from inception to successful exit, the last one being GoPago, a mobile POS pioneer which was acquired by Verifone. Before GoPago, he spent 6 years at Google, where he was a product leader in Google's Mobile division. He holds dual BS degrees from MIT (in Business and Computer Science) and an MS in Computer Science, also from MIT.

Tej Kohli | | Co-founder & CEO
Tej held GM responsibility for 3 major SaaS products at Cisco and Avaya. Frustrated by unpredictable churn and inaccurate targeting for upsell led to the start of a like minded partnership with Navneet. That's how StepFunction was born. Tej has previously led sales, marketing and SaaS orgs in the US and in AsiaPac.
Tej is a certified science nut and a home brewer (notice - no superlatives attached). He is a husband x1 and a father x2 to his awesome adult children.